On the DigInVT.com blog, we encourage guest writers to tell us about what they’re passionate about in the Vermont food and farm landscape. Caroline Abels, who contributed the following post, is known to many around Vermont as the editor of Vermont’s Local Banquet. Here, she shares another project based on her personal concern over meat production and ethical options for the non-vegetarian through Humaneitarian.org. 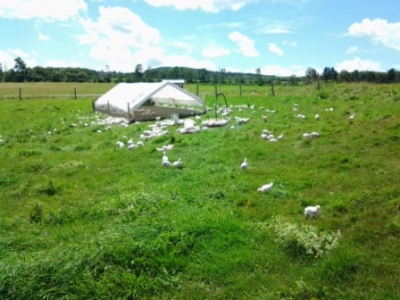 It’s a new word, and kind of hard to spell, but give it a try – “humaneitarian.”  Better yet, try eating like a humaneitarian. In Vermont, it’s easy.

What exactly is a humaneitarian?   A person who eats humanely raised meat – either all of the time or some of the time. Similar to a vegetarian, a humaneitarian keeps animals in mind when they make food choices – but unlike vegetarians, they love meat and want to support farms that treat animals well.

I’ve been a humaneitarian since 2009, when I worked closely with cows and pigs on a Vermont dairy farm. I vowed that summer to give up factory farmed meat entirely – having toyed with the idea for a year or so – and pledged that I’d only eat humanely raised meat from then on. Happily, I found lots of alternative meat options at my local food co-op – not to mention all the humanely raised meat straight from the farm I was working for.

But you might be wondering, what exactly is humanely raised meat?  An excellent question, and one I think about often as the founder & editor of Humaneitarian.org, a Vermont-based project that inspires people to switch to humanely raised meat. (I launched the website in 2011, using this new word to describe a way of life I had fully embraced and wanted to share with others.) Many Americans, after hearing about abuses in factory farms, want to opt out of industrial meat production altogether. They don’t want their money supporting such “farms.”Instead, they want to support farms where pigs give birth in the great outdoors, cows feast on grass all day, and chickens get to perch, peck, and nest. They feel that this kind of meat, broadly speaking, is humanely raised.

Still, it’s essential to to determine what, exactly, “humane” means to you,because when you get into the specifics, it’s a word that means different things to different farms and food companies. Today there are many different labels that describe meat raising practices, as well as many farms telling their own, individual story. Which choices might you prefer?  Do you want only pasture-raised meat?  Are you ok with animals being housed in barns?  Is organic meat important to you?  Are you an acolyte for 100% grass-fed? Humaneitarian.org can help you here by introducing you to different meat labels.

After you settle on what is humane to you, you’re ready to visit farms that match your morals. Not everyone in America lives near such farms, but they’re all around us in Vermont, a fact that allows me to stuff my freezer regularly with pastured pork, ethically-raised veal, organic beef, and even the occasional rabbit or duck. And these farms often welcome visitors from nearby or far away who want to learn more about their practices.

Always call farms before you visit, but here’s one that would love to greet you (I’m biased – I used to work there): Green Mountain Girls Farm in Northfield. Farmers Mari Omland and Laura Olsen can arrange a tour of their pasture-based farm in advance, where you can see (depending on the season) their adorable milking goats, chummy pigs, blissed out chickens, or handsome turkeys. They offer beautiful accommodations, too, for overnight stays, and a slew of on-farm workshops, dinners and concerts.

Applecheek Farm in Hyde Park is another treasure. They have a farm store where they stock all their meats – including hard-to-find pastured (“rose”) veal and French Muscovy ducks (depending on the season). Applecheek also hosts an occasional farm supper in their beautifully restored barn loft – go not only for the fabulous food but the warmth and graciousness of farmers John and Rocio Clark. 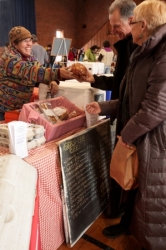 These are just two examples. You can search for farms with different meat and poultry products at the DigInVT Places page, which lists farms that are open to visitors. You can also interact with local farmers at farmers’ markets. Check out DigIn’s Farmers’ Market listings and visit each market’s website to find information on their vendors and, often, links to the vendors’ webpages. For instance, if you’re visiting Montpelier and want to take home some pasture-raised beef, go to the Capital City Farmers’ Market website and notice the listing for Greenfield Highland Beef. Stop by their booth at the market, or arrange a visit to the farm, and purchase some 100% grass-fed beef raised with pure love by Ray Shatney and Janet Steward.

Now, some farms in Vermont don’t accept visitors or necessarily have direct-to-customer sales, but that doesn’t mean they aren’t open about their animal rearing practices. Misty Knoll Farms in New Haven, which supplies a good deal of chicken and turkey to localvores in Vermont and beyond, raises its birds indoors-only and doesn’t let visitors into the barns because of bio-security concerns. But farmer Rob Litch is always willing to talk about his highly successful operation.

Of course, you can also sample humanely raised meat at restaurants. The number of Vermont restaurants that serve this kind of meat are more numerous than cattle on a Western plain. When you visit one, don’t ask “Do you serve humanely raised meat?” because that phrase can mean anything. Ask instead for grass-fed, pasture-raised, free-range, or organic meats – and preferably local ones, because Vermont doesn’t have the kind of factory farms that supply most of America’s meat protein. On Humaneitarian, you can read more about finding humanely raised meats at restaurants. Also, the restaurants on DigInVT all have commitments to purchase locally, and will list the local farms that provide their meat.

We’re fortunate here in Vermont, where we can “eat the change we want to see in the world,” to paraphrase Gandhi.  If you want to help create meaningful change for the world’s farm animals by helping change the American marketplace, start by gathering up your humaneitarian principles, doing a bit of research on Vermont farms, and supporting the kinds of farming practices that allow us to truly eat with care.

Caroline Abels is the founder/editor of Humaneitarian.org and the editor of Vermont’s Local Banquet, a quarterly magazine covering Vermont’s farms and food system.