This post by Steve Gagner, owner and head brewer at 14th Star Brewing Company in St. Albans, originally appeared on their blog February 17th, 2014. We're republishing it here as part of our March Maple series.

Although we started our “Maple City Series” of beers almost a year ago, I thought I should document them here.
. 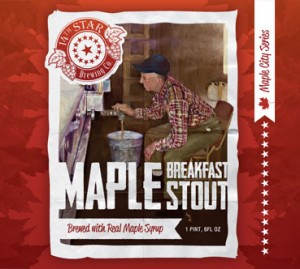 First in the line-up, the Maple Breakfast Stout

Brewed for the first time in the winter of 2012/13, the MBS brings together all of the things that we associate with cold, wintery mornings in Vermont.

The stout starts with a smooth malt backbone and very little hop bitterness, which is true to style (odd for one of our beers, I know!). A generous helping of oats in the malt bill adds mouthfeel while the chocolate and black patent malts contribute a bit of burnt toast and chocolate.

To this base we add 100% Pure Vermont Maple Syrup from right here in Franklin County and Honey from the French Hill Apiairy in St Albans. These sugars increase the alcohol content of the beer some, but also help provide some complexity to the malt sweetness, making this beer much more interesting to drink.

We use a flavor-neutral yeast for primary fermentation, as we didn’t want to impart any yeast character into this stout. After fermentation is complete and the beer is racked (moved) to the conditioning tank, we add cold-brewed Vermont coffee, accentuating the burnt toast and chocolate flavors from the malt with some roasted coffee flavors.

3 weeks or so after brewing, this beer is ready for the draft line or bottle. It pours a dark brown to black with a persistent tan head. A bit less creamy than beers utilizing nitrogen, our stout aims to capture the character of the original stouts and blend that character with modern flavor components.

A favorite at the brewery, we recently received permission to license the painting “Sugaring with Pepere” by Ann Allen as the artwork for our bottles. Ann, a local artist, painted this in honor of her father, my Pepere (french for grandfather), doing one of the things he loved doing: tending to the maple evaporator.

Pepere and Memere (grandmother) Ferland were craftsmen in their own right. Besides sugaring, they would make wooden crafts and toys – many of which are on display in the homes of their children (they raised 14!). I also have to mention that a staple of every Ferland family Christmas was the jams, jellies, and pickles that they would make in their kitchen. Since their passing, I honestly can’t say that Christmas feels the same without sunshine pickles and strawberry-rhubarb jam.

Our Maple Breakfast Stout, therefore, honors our city as “Maple City USA”, our families to whom we owe so much of who we’ve become as people, and to artists like my Taunte (aunt) Ann who capture moments like these so deftly that they take our breath away – no matter how many times we see this painting. We aspire to do the same things with our beers.

Follow DigInVT.com this March for all the maple news - and join sugar makers from around the state on March 22nd - 23rd for Maple Open House Weekend. 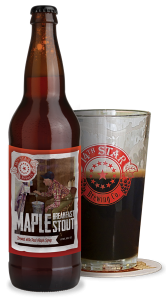