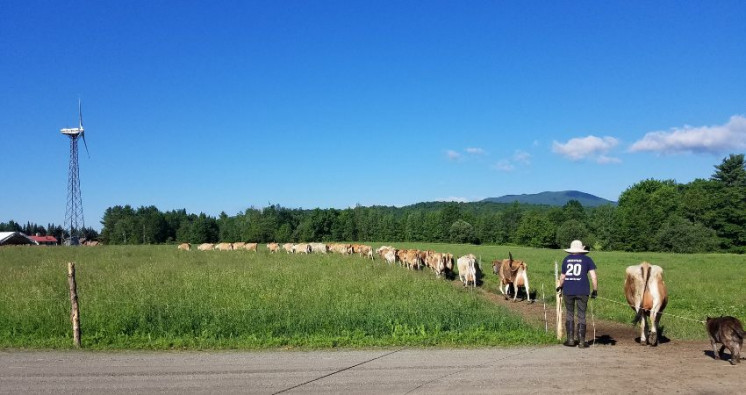 Butterworks Farm, located in Westfield, is "a farm where a cow can be a cow" (from their website). The Lazor family cares for the land, soil, pastures, and cows to produce exceptional yogurt, kefir, buttermilk, and heavy cream. They chose the Jersey breed for its ability to produce high quality milk on a 100% grass-fed diet.

Since the inception of Butterworks Farm in 1976, Jack and Anne Lazor have focused their farming efforts concentrating on organic dairy farming, value added dairy products and more recently, climate smart farming and water quality issues. From 1979-81, they sold raw milk products, Jack driving products from door to door. When their homemade processing plant practice came into the regulator’s radar, Anne shared with me how helpful the State was in advising how to get licensed. Butterworks first received its milk handlers license in 1984 and has been supplying markets in Vermont and the Northeast ever since.

The cows and people

The barn for the cows was built in 1982, originally housing 12 cows downstairs, now with capacity for milking 36-38 cows. Butterworks’ herd has grown from six Jersey cows to a total of close to 80 head, including mature cows and heifers. Presently there are five full time and six part time employees divided between the farm and the dairy plant.

For the love of yogurt

When products first hit the store shelves in 1984, they were one of very few brands at a time when yogurt consumption was experiencing an exponential rise. Folks might remember Cornucopia, Northeast Cooperatives and Stows Mills trucks delivering their products up and down the East Coast. Stow Mills eventually became United Natural Foods (UNFI) – one of the largest distributors in the US, supplying Whole Foods and National Cooperatives Grocer’s group of food co-ops. Butterworks yogurt and kefir that go to the North Atlantic division of Whole Foods is distributed by United Natural Foods. The advent of Greek yogurt and other emerging brands has since reduced sales in a competitive marketplace. The aggregation and distribution piece is another continued challenge, for farm and food producers in Vermont. Butterworks has significantly decreased their delivery trucks on the road and begun to depend on a diversified set of distributors such as Black River Produce, VT Connex, Farmers to You, Myer’s Produce and Pete’s Greens CSA on occasion. It should be noted that in times of supply fragility, finding solutions for supply chain strengthening is not a surprising Lazor endeavor.

One of my favorite tidbits about Butterworks Farm is their naming methodology for the cows. Naming groups range from countries like Morocco and Mexico, or astronomical terms. Herbs like Mustard, (Mother of Dill), and Minty and Melissa (Latin name for Lemon Balm). And of course, fruits and vegetables. Apricot had twins Blackberry and Raspberry - with a full sister named Banana. Apple Core had Apple Skin, and there is currently an Applesauce in the barn right now. Many may not know that some cows from Butterworks become cull cows. In January 2021, some cows will travel to the USDA inspected slaughterhouse Brault’s, in Troy, VT to be packaged into cuts for retail. Butterworks doesn’t offer meat for sale very often. This will be a rare 100% grass fed treat. Stay tuned for the waiting list by visiting their social media tag @butterworksfarmvt. (Avocado and Snowball are the only cows headed to Brault’s.)

Other crops and products

Clem Nilan, former General Manager of City Market/Onion River Co-op introduced me to Jack about 20 years ago. My work with Nilan in the 2000s, along with many other talented staff (Mary Manghis, Pat Burns, Duke Moulton, Rod Rehwinkel, James Morell, Ali Johnson, etc.), worked hard to increase procurement and development of VT products in almost every department of the store which is remembered as a pivotal period in the co-op’s timeline. Before arriving to the co-op, Nilan, as former co-owner of the iconic Daily Planet restaurant in Burlington, had called Lazor in the mid-80s to inquire about local beef options for the menu. Nilan shared with me that Jack had picked up the phone, proclaiming "I'm in the barn, right now - do you hear that?" (sounds of cows) "Well, let me see, she’s not for long for this world, but you can ask her."

The quality of Butterworks dairy products is widely known, but what struck me about Jack was his genius and curiosity for other crops. While at the co-op, we were able to slot Lazor’s Early Riser heirloom cornmeal sold in the bulk bins, and then eventually black beans. These were all limited edition items, tough to manage from an operations standpoint, but worth the value of showcasing excellence in agriculture and elevating eater awareness. Over Thanksgiving, I stumbled across an old cookbook: Living Soils, Thriving Farms, Heathy Communities: Recipes from Rural Vermont. On page 25 are recipes from Anne, highlighting the use of some other Butterworks bean varieties: Yellow Eye, Jacob’s Cattle, and Soldier. Marfax and King of the Early - being one of Jack’s favorites were two other beans grown by this talented farmer.

I am so grateful to have experienced the teachings of Jack Lazor that span my work in both private and public sectors of food systems work. Last year, the Working Lands Enterprise Board awarded Butterworks Farm with a $20,000 grant for market research, product development, and educational videos for climate resiliency. In usual fashion, consultants and experienced cheesemakers will assist with the project efforts as we know that collaboration comes easily to the Lazors.

I feel honored to know and have learned from Jack over the years. I am honored that Anne and Christine Lazor both would take time away from farm operations, family, and precious personal time to assist with getting this article right. As posted into their Instagram feed, here was my last note to Jack: 'Dear Jack: grateful for your wisdom and generosity. Honored and happy for our recent phone call and for the visits to the farm with you, Anne and Christine. Thank you for the adventuresome food conversations over many years! Your commitment to caring for your land and providing an abundance of delicious food will not be taken for granted. Sending all my love, xo.' --Lynn Ellen Schimoler