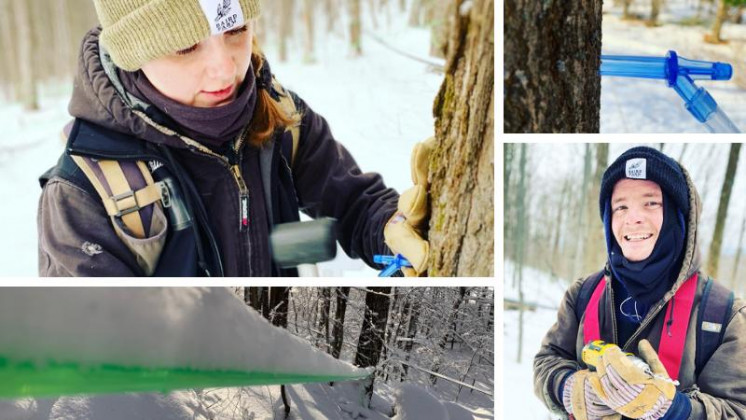 Is there anything more Vermont than making maple syrup?  We all look forward to those warmer winter days and cold nights because we know the maple sap will be running.  The history, the community, the sweet flavor, the fact that sugaring happens only once a year.  All of these thing come together to make sugaring season a very special time in the Green Mountains.

Here at DigInVT, we love to share the stories of Vermont's food and farm community.  We asked Jenna Baird and Jacob Powsner of Baird Farm in North Chittenden and Trent and Abby Roleau of Gateway Farm in Bristol what it's like to be a maple sugarmaker in Vermont.

Maple Open House Weekend is less than two weeks away.  Make a list of maple sugarmakers to visit and make sure you say hello.  This is your chance to learn about the tree to pancake journey of our favorite sweet ingredient - maple syrup.

Where is Baird Farm located?

What's the history of your farm?

Our 560-acre farm is located in Chittenden, Vermont and has been in the Baird family for four generations. Bonnie and Robert Baird own and operate the farm today while I, their daughter, Jenna, and my partner, Jacob, own and run the maple syrup retail business.

Robert’s grandparents, Sara and Ralph Baird, both grew up on farms on the same road. In 1918 they purchased our farm from Sara’s sister and brother-in-law. Their son Richard took over the operation in the 1940s and ran the farm until 1979 when Bonnie and Robert purchased the property.

Maple syrup was produced here even before the Bairds moved to the property. When Sara and Ralph began farming they milked cows and made butter that was sold door-to-door in the nearby town of Rutland. As the dairy herd grew, milk was sold into the Boston market and later to our local Cabot cheese plant. The milking cows were sold in 1996 and, since that time, our maple syrup has grown and expanded – now being the primary crop on the farm.

How did you get started in maple?

Maple has been in my family for at least four generations – 100 years! My great grandmother made syrup on the farm on a very small scale and taught my father. My father started it as a hobby, but when he came back to the farm after college he began to grow his hobby into a business. Four years ago my partner, Jacob, and I started working on the farm for my parents in the production part of the maple business and bought out the retail side shortly after.

What have you learned from when you started until now?

Communicating is extremely important especially in a family business, build things bigger than they have to be for anticipated growth, and always have a backup plan if something breaks. Along with many other things!

How many taps do you have?

What do you enjoy about making maple syrup?

There are so many things we enjoy about making maple syrup it is hard to pick just one. We love the smell of the steam in the sugarhouse, seeing all the sap pouring into the tanks after all of the hours we've put into tapping the trees, and we love sharing the sugaring experience with all of our friends, neighbors and customers.

What was the inspiration for your other maple products (maple ketchup and spruce tip infused syrup)?

There are so many value-added maple products on the market, i.e. maple hot sauce, maple mustard, maple bbq sauce, but we had never seen maple ketchup - so of course, we had to pursue it! The spruce tip infused maple syrup was a random idea we came up with while chatting with a friend about different types of beer.

Do you have any new products on the horizon?

Yes, we have a few ideas for upcoming new products. Keep your eyes open for more infused syrups and granulated maple sugar!

What is one of the most rewarding things about being a maple syrup producer in Vermont?

There are so many rewarding parts of being a syrup producer in Vermont. We love being able to maintain the longtime Vermont tradition while keeping our farm in our family, we love working outdoors and we love sharing the sugaring world with visitors from all over.

What are your plans for Maple Open House Weekend?

Each year we participate in Maple Open House Weekend. This year, we will be serving free rosemary waffles and maple syrup tastings throughout the day. We will also be providing tours of our sugaring operation. Boiling will be weather permitting – but we try our hardest to make it happen so that folks get a chance to see us in action.

We made a fun cocktail the other week with our spruce tip infused maple syrup:

1. Use a cocktail shaker with ice to combine gin and maple syrup

2. Pour into a cocktail glass and top off with champagne or seltzer water