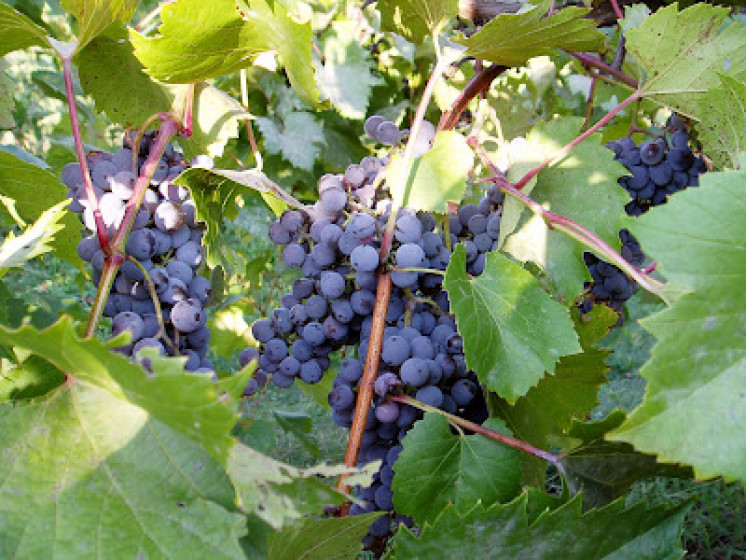 If you know me or if you’ve read any of my previous posts, you’re probably aware that I have an appreciation for wine. It’s an appreciation I’ve been cultivating for a good, long while and that has led me to taste many a wine.

I’ve toured several vineyards in my travels—in France, Italy, and California—but I’ve never participated in the winemaking process before. At least not until last week when I volunteered as a grape harvester at Lincoln Peak Vineyard, an award-winning winery owned and operated by the Granstrom family and located just outside the town of Middlebury.  Harvesting starts at 7:30 am, and as I drive the few miles from my house, passing mist rising from fields in the early sunlight, the first two lines of Keats’s poem “Ode to Autumn” come to mind:  “Season of mists and mellow fruitfulness!/ Close bosom-friend of the maturing sun….” During this most beautiful time of year, I’m glad to have packed my hat and sunscreen, but the sun’s rays will be far from oppressive today. Gone too is the humidity; at noon on a day like this, the air will feel like silk on my skin.

The rest of the crew, six other pickers ranging from recent college grads to a man in his 70s, arrive at the vineyard around the same time. We’re met by Sara Granstrom, who was in high school when her parents Chris and Michaela transformed their former strawberry farm into a vineyard back in 2001.  After graduating from college, Sara worked at a few places in Vermont, getting “as far away as Waterbury,” before returning to work full time at the winery with her dad.

Since I’m new to grape harvesting, Sara shows me how to go into the vine “like a surgeon,” removing only the clump of grapes, which sometimes are twisted around vines and leaves and supporting wires.  She demonstrates how not to snip your finger in the process (which I accidentally do, midway through the morning, but only slightly). The other hazard to watch out for is yellow jackets who like to feast on the ripe fruit. More than once I surprise one whose head is deep inside a grape, but they’re so drunk on juice that they simply fly sluggishly away.

We’re tasked with picking Frontenac Gris, which is a gorgeous deep plum color, touched with a misty grayness.  When you peel back the skin on a grape, the fruit inside is pale yellow. Despite the grapes’ deep outer color, they’ll be used to make a white wine, called Sycamore.

It’s meditative work, snipping the clumps of grapes and dropping them into stacked buckets. The other pickers, Sara included, are scattered along the grapevine rows, and sometimes when our work converges we strike up a conversation.  I pick for a while beside Erik, a recent college grad who just flew in the night before to take a job in the winery. He grew up in Minnesota, where his father works in the grape breeding program at the University. The grape varietal we’re harvesting, Frontenac Gris, was actually created by his father, along with several other winter hardy grapes grown at Lincoln Peak. In recent years, these new varietals have transformed viniculture in northern climates like Vermont, enabling winemakers to produce higher quality wines. Lincoln Peak has some awards to prove it: in fact, they’re the only winery in America to win three Best of Show awards at the International Cold Climate Wine Competition.

Part of the reason for the Granstroms’ success is most likely their sustainable farming practices. That, and the obvious love and care that this father/daughter duo puts into their twelve-acre vineyard and winery. Although Lincoln Peak wines are available only in Vermont, they sell out every year and at this point the Granstroms are not looking to expand. They’re already the largest grape producer in the state, among more than a dozen registered wineries and even more vineyards.

At around 10:30, after enough grapes have been gathered, Sara drives a tractor through the rows and she and Erik load the buckets onto the wagon.  Then they haul the grapes, all 2,300 pounds of them, down the hill to the winery where Chris, head winemaker, awaits their arrival.

The three of them soon organize into an efficient assembly line: Chris unloads a bucket of grapes, weighs it, and records the weight in a notebook alongside the picker’s name; Erik grabs the bucket and dumps it into a machine that destems  and crushes the grapes.

The stems are spit out to the side and form a mound destined for the compost pile that will eventually fertilize next year’s crop. As the buckets are emptied, Sara rinses each one out, while the crushed grapes make their way through a tube into the press. Inside this vat, a giant, inflatable balloon gently presses the fruit against an interior side that has a series of holes. As the fruit is compressed, its juice flows through the holes and into a container below the press. An earthy sweetness floats in the air. From here, the juice runs through more tubing and finally makes its way into a huge tank where it will ferment and age. Since Sycamore is a blend of 60% Frontenac Gris and 40% Frontenac Blanc grapes, the two will eventually be combined and then bottled before the wine is ready for consumption next May.

Harvesting is hard, physical work, especially since the season has been condensed this year, thanks to favorable weather. It usually spans about a month, Sara explains, but since the process has been accelerated, it will probably only last 2½ weeks. That puts some pressure on the winemaker to gather and press it all within a shorter time frame. These 2,300 pounds of grapes will yield approximately 180 gallons of wine, or 900 bottles. Not bad for a morning’s work. But Sara and Chris are far from finished. The rest of the crew is still up on the hill picking, and down here in the winery the process will be repeated a few more times before they all call it a day.

As for me, I head home with a bottle of last year’s Sycamore and later that evening sit down to enjoy the fruits of my labor. The wine is deep golden in color and has a rich, smooth mouth feel. It tastes of lush peach with a hint of spice: a glass of “mellow fruitfulness” that captures the morning mist and waning sun of a mid-September day in Vermont.