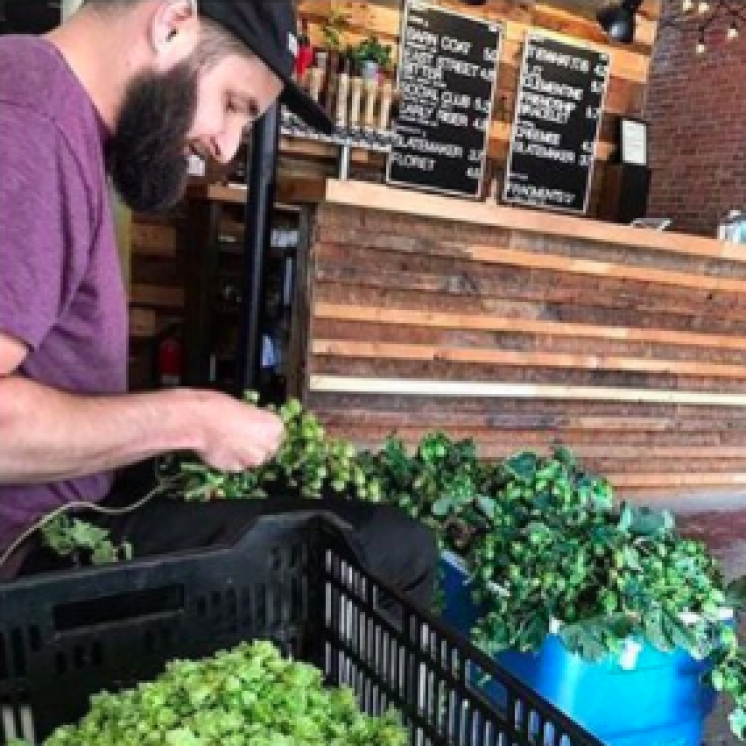 Head Brewer Andrew Leichthammer of Good Measure Brewing Co. goes above and beyond to source locally - from foraging fruit to collecting wild yeast. We checked in with Andrew about his local beers and upcoming Beer Dinner with Farmhouse Tap & Grill on October 11th.

Tell us a little about the brewery, what's special about your beer?

So we started this project in November/December of 2015. We had over a year of construction on the building located here in Northfield, VT. We converted this former 1940's IGA/Grand Union Grocery store to our brewery and tasting room and opened to the public December 23rd, 2016. We brew a lot of different beers and styles but we focus mostly on pub beers or easy drinking beers from all around the world. To date, we have brewed over 110 batches of beer over 75 of which have been unique one-off beers. Our 4 core beers that we always produce include an American Cream Ale, English-Style Extra Special Bitter, Belgian-Style Saison and an American Pale Ale.

I was an avid homebrewer having brewed my first homebrew in 2006. After working at The Farmhouse Tap and Grill for a few years I moved on to help open and run Mule Bar in Winooski, VT. I partnered with Scott Kerner at that time who is also now my partner in Good Measure. After running Mule Bar for a few years I left to start construction on the Good Measure space and we brewed our first commercial beer early September 2016.

How do you incorporate local ingredients into your beer?

I like to focus a lot of my brewing on Belgian influenced farmhouse ales and sour beers. This gives me a lot of room to work with lots of local ingredients. We have brewed with local malts including Spelt, Wheat and Buckwheat. We have brewed with local ingredients like coffee and caramel. This summer we spent a few weeks foraging for found/fallen fruit including Peaches, Cherries, Blueberries, Chokecherries, Aronia Berries, Raspberries, Apples and more. I really like bringing as many local ingredients into my brewing as possible and I like the connection that we make with our farmers and neighbors in the process. We have even begun to harvest local wild yeast that we plan on using in some small-scale barrel projects.

Do you have a favorite beer that makes use of a local ingredient?

Our newest beer to hit the market was our Harvest Grisette. This was brewed with all local VT grown and donated whole leaf hops as well as local raw spelt and raw wheat from our friends at Rogers Farmstead in Berlin, VT. It is a traditional light Belgian-Style beer with subtle notes of bubblegum and spice and at only 4.0% abv it's a crushable beer that you could have a few pints of. I really like this beer and I think its a great representation of how well local ingredients can work in a beer.

What are some challenges around making beer with local ingredients?

What do you think the future holds for Vermont beer? Do you think we'll see more local sourcing?

I'd like to say that more people will begin sourcing local ingredients. I see the trends moving towards more session-able small beers that can really reflect the bounty the local farms can provide us brewers with.

Good Measure is partnering with Farmhouse Tap & Grill for a special Beer Dinner to benefit VFN on October 11th - how do you go about choosing beer pairings?

For this dinner, I wanted to showcase two of our core beers and two of our new beers. I chose our ESB and our Saison for two of the courses because they are so incredibly food friendly. For the main meat course I wanted to choose something that would cut through the richness and the fat in the pork so I paired it with our new IPA and for the dessert course I wanted something that would work well with the spices and the apple so we pulled a new beer out of barrels that reflected those similar characteristics. Food pairing doesn't have to be a challenge and when you have beers that work so well with food it makes the selection fairly easy!