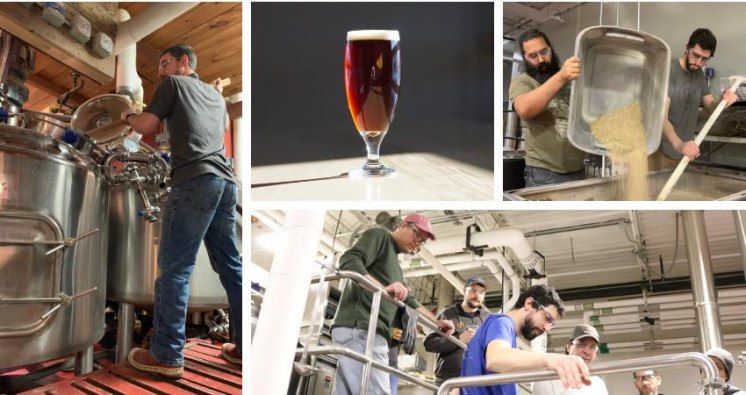 Whether you’re a home brewer or you brew professionally, the beer community in Vermont is very connected and close. Everyone is always welcome to taste, to brew, and to just hang out and enjoy time together.  More and more we’re seeing Vermont brewers brew special new beers together. These “collabs” bring out the best in each brewer. But how does the magic happen? We went behind the scenes to find out how breweries develop a new beer recipe together. We wanted to see how the spark of an idea becomes a special new brew. Does it happen over a beer? We spoke with a few of the Vermont brewers who came together to have fun and do what they do best. Brew beer.

Let's hear from our brewers...

Brewers Christophe Gagné and Avery Schwenk of Hermit Thrush are known for their fruity, funky, tart sour beers. They have seven special "collabs" ready for the brewers festival.

Avery had this to say...

"Most often, collaborations happen rather organically. Typically either super nerding out on a beer, or laughing about something and then realizing that one of you is being half serious. And it goes from there. Which is also why collabs are so much fun! The camaraderie that exists between brewers is pretty special. Brewing is hard work. It's a lot of cleaning, long hours, and heavy lifting; so it's immensely driven by passion. Also great minds think alike, and so magic happens when brewers unite.

The Killington Fest has collaborations as its theme and highlights all the special moments where two (or in our case, three) brewers got together, had an a-HA! moment, and then decided to brew it. We are doing seven total collabs. To highlight just a few origin points on some of our collabs: When Pigs Fly with our good friends at Prohibition Pig. We started the conversation with thoughts on what to make. And then the conversation turned to what we each swore we would never make. Haha, and so naturally, that's what we made. A glitter DIPA.

Ménage a Trees is a three way collaboration with 14th Star and Zero Gravity. This is what happens when you put three brewers in the same room together. We are each adding a type of plant/tree into the beer. We chose a locally foraged one called spicebush.

Lastly, I'll say that one of the best parts of a collab is coming up with a name. I personally find our three way collab Ménage a Trees particularly clever. And then there's always the education. Brewing isn't this huge secretive competition like other industries. We all teach and educate each other to brew safely, efficiently, and to push the boundaries of how to make the most delicious beer we can.

The folks at Mill River Brewing paired up with Farnham Ale & Lager for an American Pale Ale.

"We have created a collaboration beer with Farnham Ale & Lager, called In Cahoots.  This is an American Pale ale made with Simcoe, Mosaic, El Dorado, and Mandarina Bavaria hops with an ABV of 5.5%.  It's balanced with tropical sweetness and tang with clean a dry finish."

“We brewed a barrel-aged barleywine with Frost Beer Works back in November. This collaboration started with a conversation while we were sitting around drinking some amazing VT beer. We started throwing around ideas of what we'd like to try, and before we knew it, it was brew day. The beer was brewed on Frost's 7 barrel brewhouse, fermented normally, and then aged in Tom Cat Gin barrels for 3 months. We recently pulled it from the barrels, carbonated and packaged it. It came in at 12.5% ABV with lots of complex characteristics coming from both the base beer and the gin. Very excited about how this beer will develop with some age.

We brewed an 8.9% Wee Heavy with the Green Mountain Masher's homebrew club. We generally work with the homebrew community yearly with our Make the Cut Homebrew competition. We decided to hold off the event this year, but decided to invite the entire club in to brew with us. We let the mashers pick the beer and the recipe, and then we scaled it up to our production system. We had about 20 homebrewers come in on the day of the brew and worked with them on every aspect of the brew day. This was definitely a fun one to work on. The beer will be available in cans and on draught leading up to the festival on March 23rd.

We brewed a Tmavé Pivo (Czech for "Dark Beer"), with Simple Roots Brewing called "Beer Today, Gone Tmave". We brewed this on Simple Roots 3.5 bbl brewhouse in late January. We had a great time brewing this on their system, and we were even able to offer a few pointers on how to make his system more efficient. I had never heard of this style of beer before it was suggested as an option by Simple Roots brewer and co-owner, Dan Ukolowicz. We started with a basic recipe and then tweaked it to our liking. This is a great easy drinking lager with a complex malt bill. Starts out with sweet malt character, leading to a toasted bread character, and finishes dry and crisp!

Lastly, we brewed an incredibly experimental beer in a three-way collaboration with Hermit Thrush Brewing and Zero Gravity Brewing. We had many conversations about what we wanted this beer to be, and it had many iterations before we landed on the final recipe. The beer is called Ménage à Trēes and it's a dark sour lager soured with Hermit Thrush's house lactobacillus strain and fermented with Zero Gravity's house Lager yeast. We brewed this with three types of trees each picked by a participating brewery. Hermit Thrush chose locally foraged spicebush, which has an amazing aroma of allspice, nutmeg, sage, citrus, mint and pink peppercorn. Zero Gravity chose juniper, which is the main herb used in producing gin. We (14th Star) chose to use birch syrup from Georgia Mountain Maples. Unlike maple syrup, birch syrup has notes of berry, molasses, and a hint of spice. All of these characters combined with a dark sour beer as the base gives an incredibly unique flavor profile. We are all incredibly happy with the way it turned out!”

Scott Salmonsen, the owner operator brewer of Saint J. Brewery in St. Johnsbury got together with Josh Smith of Kickback Brewery for the Winter Festival.  The beer they made together is called Taco Lager. It's a German Dortmunder brewed with lime zest and “Secondaried” with fresh jalapeños, pineapples and limes.

Scott says: We presently have it on tap at the brewery to see how it came out. It is pretty much exactly as hoped. It's a little sweeter and softer on the mouth than a lager with a very mild jalapeño lime finish. After the festival, Trail Break Tacos in White River Junction will make this a house beer and serve it with their wonderful tacos and nachos.

The Vermont Brewers Festival in Killington is less than two weeks away. Be sure to pick up your tickets and you can enjoy these special beers brewed just for the festival.  HERE IS A COMPLETE LIST OF THE PARTICIPATING BREWERIES AND SPECIAL BEERS you can expect at the festival on March 23rd. Enjoy!