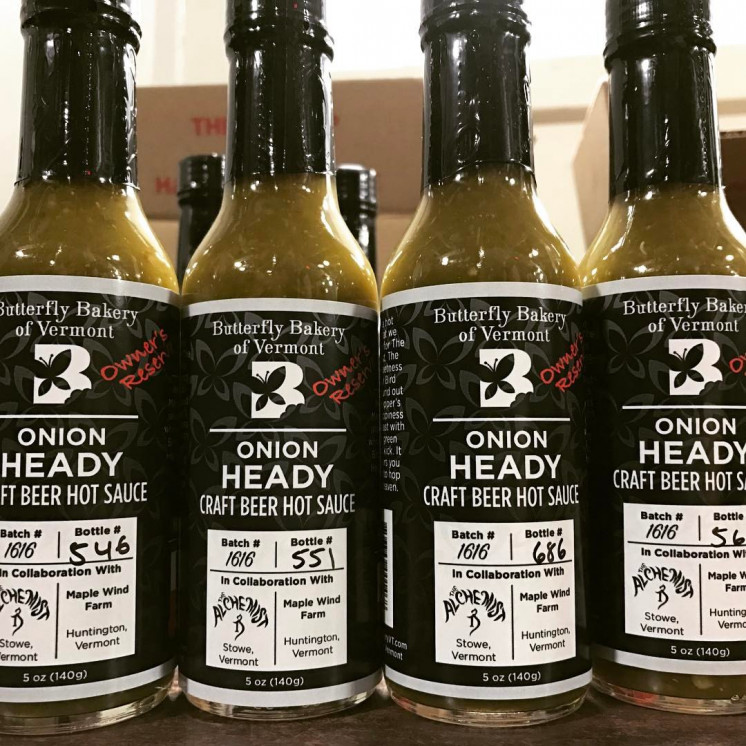 It's about to be April. . . which is not the height of harvest season in Vermont. Nevertheless we still have plenty of Vermont farm products available. It's also a time where our specialty food producers shine, preserving Vermont products each summer to enjoy through the year. Here's a profile of one food maker: Butterfly Bakery of Vermont. Thank you to the Vermont Fresh Network for sharing this from the Fresh Feed.

Butterfly Bakery began almost 15 years ago with owner Claire Fitts Georges baking long nights in rented oven space in Montpelier, VT. The cookies, granolas, and other baked goods she made soon attracted a loyal customer base because 1. they were (are) delicious and 2. they use alternative sweeteners (lots of Vermont maple syrup!) and grains (spelt goes really well with Vermont maple syrup!).

Today the nighttime baking is long gone; Claire opened her own space in 2007 where she bakes for wholesale clients and the Montpelier Farmer's Market. And her products have expanded well beyond baked goods - in fact, her fastest growing line is hot sauces. Claire's hot sauces aren't just made here in Vermont, they also feature Vermont produce - from the hot peppers that are their primary ingredient to the specialty ingredients going into batches like Hot Squash, Vermont Peach, Smoky Seyval, and Maple Sugar Shack. Here's some more from Claire on the hot sauce trade:

How did you get started with the hot sauce line? It's a bit of a leap from cookies?

Farmers Market sales were faltering in 2011 and I decided that, rather than give up on Farmers Markets, I would utilize my recipe development skills to create something that customers would want to buy from me. I did a lot of “experimental” products that kept customers coming back to sample, but my favorites were the ones that utilized the farmer “extras” left over at the end of the market. Farmers often had chili peppers left at the end of the market, because, in Vermont, they’re easier to grow than to sell. My hot sauces became quickly popular and their shelf stability meant that I could do large batches that would sell over several weeks. So the numbers of experimental batches just kept growing until it became a regular thing.

How has this hot sauce enterprise changed since you began?

Well it’s grown a lot. My initial batches were 10 or so bottles. Then maybe 50. Now the micro batches are usually around 150 and the big batches are around 1500 bottles. Also my skill has grown tremendously. I was flying pretty blind when I first started making hot sauce, with only random blogs as reference points. Now I have a much better understanding of how to adjust my recipes to get the results that I want. That’s been part of the beauty of my micro batches of hot sauce. Like comedians hone their skills performing every night, I’ve learned a lot of the ins and outs of different ingredients by doing so many different kinds of hot sauce.

You can see a video of Claire making one of her big batches at the Food Venture Center with Alchemist owner John Kimmich.

Vermont isn't necessarily known for its hot peppers (yet) - can you tell us a little more about the peppers you're sourcing?

My first farmer producer grew a wide variety of peppers and I played with them.

About that first producer. . .Jim just blisses out in his garden. Every year he tells me that he's not going to grow peppers again, then deep in the winter he gets the itch and ends up starting 1000+ plants in his living room because he's just that kind of guy. His peppers are the ones that gave us a name in the hot sauce world. Without his peppers we'd never have made it this far. Let's just say that he has a lifetime hot sauce subscription with us - From ButterflyBakeryVT.com

As my scale has grown, jalapenos and habaneros have proven to be the easiest to source, so I’ve been relying mostly on those . . . although now I’m finding more farmers who can diversify their pepper crops and will start having a wider variety of peppers again in 2017. Vermont’s lush, wet soil produces full flavored, heavy peppers, which are entirely what has made my hot sauce so yummy. I can’t imagine how my flavors would change if I started sourcing peppers from areas with a different growing climate.

How do you acquire all the hot peppers you need, especially as your business is expanding?

There is no way that I could source enough peppers from farmers if I just relied on the peppers that they were already growing. I contract with farmers in February for the peppers that I will buy in the fall. I’m almost positive that I’m now the number 1 purchaser of Vermont chili peppers. I was getting 500 lbs in 2014, 2500 lbs in 2015, 6500 lbs in 2016 and now I have 17,000 lbs on order for 2017. It’s important to me to purchase from a wide spread of farmers so that if any one of them has crop problems, I still have plenty of peppers to last me through the year. As the peppers come in, I hire folks to destem them, bag/box them up and freeze them. Right now I’m freezing my peppers at the Vermont Food Venture Center, but I will be moving into a new facility in the next month that will house my own 300 sq ft freezer (plus a shiny new kitchen).

You've been working recently with some of the state's craft brewers on hot sauce lines, how is that going?

I’m so excited about this project. The only thing holding me back is a lack of peppers (it turns out that 6500 lbs isn’t enough for a year). With the 2017 crop of peppers I am going to be debuting a line of Craft Beer & Brews Hot Sauce that will feature different Vermont beers and ciders. The flagship will be my existing Heady Pepper hot sauce made with Heady Topper IPA, but I have many new flavors waiting in the wings.

Any other popular Vermont foods you think deserve to be turned into a hot sauce line?

I just hired a new saucier who has a background as an herbalist and we were talking about making herbal inspired hot sauces. I also just came across a maple vinegar made from sap and it was so delicious. I’d love to figure out how to incorporate that into some batches. I don’t even know what else. I’m constantly coming up with ideas. There isn’t enough time for all the flavor ideas that I have listed out on my phone.

What's on your mind for the future?

It amazes me that after plunking along at a good small business, I finally have a product on my hands that has some serious potential for growth. Now I’m just trying to figure out how to grow it in the right way that aligns with my attitudes about business and with my life. I want to do more philanthropy with my hot sauce (our Genersaucity program donates 100% of profits from a given batch to a chosen charity). And I want to create a Vermont pepper market - both creating enough volume to make Vermont hot sauces and creating cache for a Vermont Pepper.

Claire has recently started selling to restaurants, and is “learning the ropes” of this type of market. She sells to independent food stores across Vermont and online at www.ButterflyBakeryVT.com. She also makes exclusive batches for the Alchemist in Stowe.