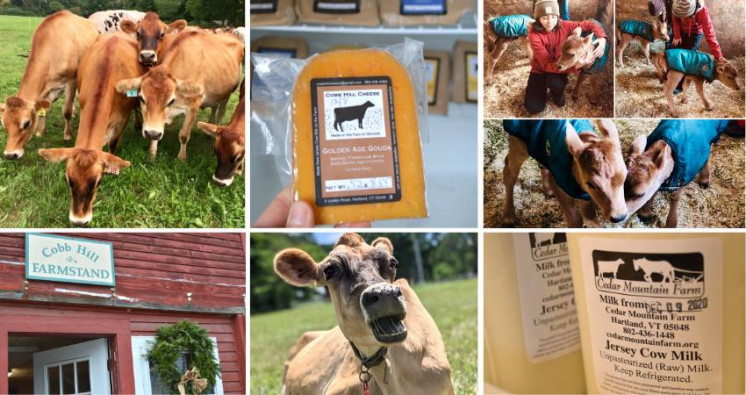 Cedar Mountain Farm is a working family farm in Hartland, Vermont. Located at Cobb Hill Cohousing, owners Stephen Leslie and Kerry Gawalt (with their daughter, Maeve) have been farming for decades. They operate a vegetable CSA program and dairy, are co-owners of the on-site cheese business (Cobb Hill Cheese), run a 4-H club, and so much more!

Learn more about the 4-H club and showing cows with Maeve Leslie-Gawalt here.

About the farm and its people

Kerry and Stephen divide farm tasks and have different areas of focus. While Kerry oversees the herd health of the 60-70 cows and rises before dawn to do the morning milking, Stephen does the nighttime barn checks and much of the field and pasture management. The couple has four Fjord draft horses and their market garden has largely been horse powered. Kerry heads up breeding, marketing, the website, schedules employees, 4-H, makes cheese once a week, and manages the harvest, washing, packing, and sales for the CSA. Stephen manages the compost, hay fields, the market garden and soil health, moves the temporary fence daily during the six months the cows are on pasture, and heads up various barn chores. They employ part-time and seasonal staff and at least one full time employee involved in all three aspects of the farm (dairy, cheese, and vegetables).

What is your background? What did you do before farming?

Stephen: I have always loved to write and draw. I went to art school and I am a painter. I’m attracted to the artisanal quality of scale of the farming we do. It’s an aesthetically pleasing place to be in: a healthy, functioning landscape with beauty. Farming is not so far removed from art.

Stephen is a published author, with two books out about using draft horses in market gardens: Horse-Powered Farming for the 21st Century and The New Horse-Powered Farm. Stephen wrote articles for years for the Small Farmers Journal and Rural Heritage magazine; after a while he realized he had the makings of a book. Stephen has also written some unpublished fiction and most recently, articles about a solution to climate change. Read more here: Stephen Leslie: A diversified and regenerative future for Vermont farming in VTDigger.

How did you get into farming?

Kerry: I started working on a farm in high school, with vegetables, cows, and a creamery. I would pack yogurt. I’ve basically been farming since then!

Stephen: My first and primary teachers were Mayan from Guatemala. Organic farming has roots in what traditional indigenous people have always done - protect and preserve. I met a couple taking sanctuary from war zones during my time at the Weston Priory. These Mayan farmers were adapting their techniques to Vermont! They were growing acres of self-sufficient polyculture. They took me under their wing and I learned about the three sisters and all about Mayan farming. I have stayed inspired by them since 1985.

Stephen and Kerry use organic and regenerative farming methods, and Stephen spoke about his excitement to transition from traditional organic tillage to a no-till method. The farm started on this path the past year, 2020, and they are very encouraged with the results and the quality of produce. What they had been doing for 19 years is considered traditional organic farming - cover crops and compost, using tillage tools to incorporate into the soil and cultivation for weed control (with the draft animals). As Stephen learned more about how farmers can be part of the climate solution and the five principles of soil health, he researched switching to no-till. The compost they produce from the dairy was key to use as 4-5 inches of mulch on the garden beds, with ramial wood chips in the pathways.

Stephen explained that agricultural fields were once old growth forests, which made the soil bank. Removing the trees removed the fertility engine that builds the soil. Farms have to continually supply fertility. The main way Cedar Mountain Farm has done that is through the cows (they bed with wood shavings) and cover cropping. Now, with the additional introduction of wood chips (sourced from power line companies), earthworms, fungi, and bacteria were plentiful at the end of this season as they renovate and regenerate the fields. Wood chips encourage fungi and better mimic the mycorrhizal forest soils that provide long term stable carbon, rather than feeding carbon to the soil. The soil will have a better immune response to stressors and resilience to drought in this time of changing weather patterns.

This is our next step, a new adventure with new knowledge. It makes what we’re doing all fresh again at this point in life and gives me hope that we can actually draw down carbon from the atmosphere and produce food, says Stephen.

Stephen creates a new paddock every 24 hours for the cows. There is a cycle of how grass grows; it’s not a formula. It’s much more about being attuned and staying adaptive to keep the cows well fed and the pastures healthy, all while building soil. Over the last ten years they have received grants through the NRCS for pasture infrastructure. Prior to the grants, they practiced “set stocking,” where 50 acres were divided into paddocks that the cows were rotated in. Stephen says this was better than what the previous owners did, where the cows had access to the whole pasture at once. After 3-5 days of being grazed, plants begin to regrow, and if they get grazed again at that point, it has a detrimental effect on the plant. Now, when the cows are only in each temporary paddock for 24 hours, the plants are able to maximize photosynthesis and root growth, activating soil biological processes.

I love being out every day, walking on the land, says Stephen.

While this method has its challenges, it’s also an interesting and fun way to manage cows. Because they are outside and have more natural expression and function, Stephen feels the cows have better longevity and are healthier and happier - which results in happier, healthier products for people.

Did you know that cows don’t like change, they like to know what to expect? They appreciate having the same people milk them. Consistent milkers get to know the cows and notice when something is off.

Tell us about the cheese!

Kerry reports that about 50% of their milk goes to make Cobb Hill Cheese, with the rest going to feed the calves, to the raw milk customers, and to Cabot Cooperative. Cobb Hill Cheese produces an alpine cheese - “Ascutney Mountain,” a Caerphilly style cheddar - “Four Corners,” havarti, and gouda. They are often thinking about what is next, doing market research, talking to cheese shops, and doing test batches.

How does the raw milk program work?

They have been licensed to sell raw milk from the start. They have found that their customers sign up for milk for a variety of reasons - some people like raw milk, some people particularly like Jersey milk, and some just like to buy milk directly from a farm. About 60 customers pick up anywhere from a quart to 3-4 gallons of milk weekly. Kerry likes to hear how the milk is used - to make fresh mozzarella, yogurt, ricotta, and more.

Tell us more about the cows and 4-H

Kerry started the 4-H club in 2013 and it has primarily grown through word of mouth. Students work with the animals all year and go to fairs to show off their hard work. Kids learn responsibility, they connect to animals which is a form of stress relief, they learn patience, life skills, public speaking, how to be organized, how to educate the public about dairy cows, and how to work together. Read more about 4-H from daughter Maeve’s perspective here. Cedar Mountain Farm cows are classified, genomically tested, and often sold nationally.